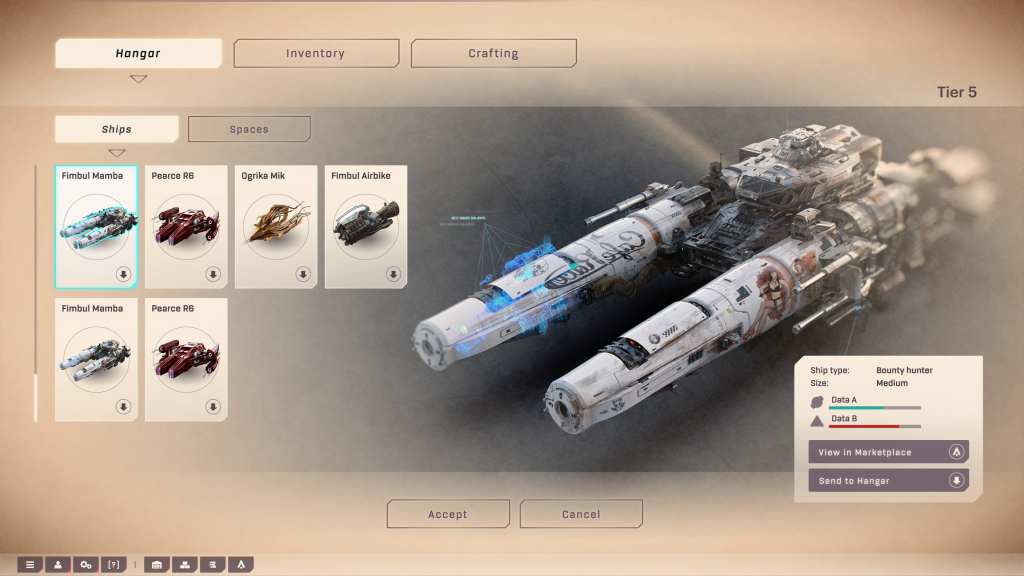 Unless you took an offline sabbatical the last few weeks — not necessarily a bad idea, given the current state of the market — you will know that Star Atlas is getting ready for an action-packed summer! The team kicked things off last week with the Council of Peace Assembly, which brought the whole community together with guild pitches, a custom DJ set from Bassjackers and celebrity hosts: Ash, Santi and José!

But besides all of that, a truckload of alpha was dropped during the event, culminating in a 15-minute session by Michael Wagner (CEO) where he described what we can expect during the next 4-6 weeks, and afterwards!

Using his list as guidance, below you can find a summary of all the alpha that was shared* during COPA 2622!

*) plus a few clarifications made by the team afterwards

For many months the team has been very reluctant with sharing visuals of the showroom module, as their partner — Sperasoft — prefers that intermediate work is not shared (as it can reflect badly on them). However, over the last few weeks, more and more material has been coming out, and COPA was no exception! This all seems to signal that the first iteration of the showroom is getting closer to a release. This was confirmed by Michael during the COPA Townhall, where he stated that this would be one of the earlier releases we can expect.

Note that this first release is a non-optimized, pre-alpha build of the game and as such, it comes with some hefty PC requirements. The full release is expected to happen in October, and hopefully, performance has improved a little by then as well.

The recommended minimum specs for the pre-alpha build are:

So, what was released during COPA? A brand new video that you can check out below:

Earlier this year, Michael shared that the team was working on a few different (multi-)media campaigns to further promote the game. In the recent past we learned about their upcoming podcast series, and during COPA Swags revealed another project: A Graphic Novel!

The idea is to introduce an actual hardcover comic book further down the line, but pretty soon everyone will be able to enjoy the very first issues online, with additional issues being released every couple of weeks.

The series will depict events that transpired in the Star Atlas lore, before the current day (2622). In other words, this comic series will provide a glimpse into the (recent) past of the universe we will step into at a later point in time.

Just like with the podcast, there will also be NFTs associated with this comic book. One use-case of these NFTs is that they can be redeemed for physical copies of the graphic novel!

Additionally, Michael shared that the showroom module will have easter eggs hidden on the map, which will allow you to snag a physical copy of this graphic novel as well. Though unconfirmed, it’s probably not a stretch to assume that this means the aforementioned NFTs can be obtained by hunting for clues in Volant Studio!

The artist working on this series is none other than Tim Mcburnie, who you might know from his concept work on the Tufa Feist!

The team is still hard at work at the Star Atlas DAO, and its very first iteration will be coming online next month as well! This means that a new section will open up that will contain a landing page with information, a help and resources section, network metrics, and more. Most importantly, however, it will come with the POLIS Locker (aka POLIS staking)!

Other core DAO functionalities will be released a little further down the line, like creating a proposal, voting on proposals, and a platform to discuss them.

The very first major section of the DAO that will come online is the POLIS Locker. This is the name of the POLIS staking module that the team has been working on for many months.

The POLIS Locker will allow you to choose the amount of POLIS you want to stake, and the duration for which to lock it. The longer the duration, the greater the staking reward and the more voting power you have.

As can be seen in the screenshot above, the Locker will present you with everything you need to know in a super clean and modern interface. Among other things, it allows you to manually compound your rewards and also shows you how your voting power will be adjusted over time if you decide not to do so.

Luciano Castillo (Director of Product Design) took the (brew-)stage during COPA to talk more about the many improvements the new marketplace will bring. Among these are:

Perhaps most important: The new marketplace provides the groundwork for the inclusion of true NFTs (Non-Fungible Tokens) further down the line. Currently, everything sold on the marketplace is a so-called SFT (Semi-Fungible Token), which is not unique at all. But once Ship Configuration becomes possible, ships will become unique and therefore will become NFTs instead. That means you can no longer stack them and a whole new approach is required to visualize them in the marketplace.

That visualization is already present in the new marketplace, and can be seen in this snippet from the presentation:

Luciano also shared some other visuals of the new looks, for both desktop and mobile:

The long-awaited referral program will be launching shortly after the new Marketplace has gone live, as it integrates directly into it. This program is associated with your profile and will allow you to earn nice rewards, in exchange for bringing new people into Star Atlas.

And later this year…

Another program that lives in the upcoming Star Atlas DAO section, but is tightly bound to the new Marketplace as well, is ATLAS staking. It will have direct functionality and benefits for people using the marketplace.

A lot of material was shared in a separate presentation by Mo Yazdani (Product Manager) on SCREAM, though this module won’t be launching any time soon. Michael did mention we can expect the game to arrive this year!

Mo’s short presentation can be found below, in which he showed some footage of the current prototypes the team is working on.

One of the key takeaways is that combat will not be instanced or turn-based. It will occur in real-time and be deterministic, which means it is in no way dependent on player skill. Every fleet’s combat score will be visible to both parties.

Additionally, we got 2 high-quality screenshots as well, showing aspects of the hangar in SCREAM:

In addition to the visual goodness above, Michael also dropped some examples of how our ships will be rendered in SCREAM. The ships are designed in the highest possible fidelity by the team, as the Unreal Engine supports that effortlessly. However, as SCREAM is running in your browser, that fidelity needs to be tweaked down severely, to the point where it makes more sense to construct simple 3D models from scratch.

Here you can see what the Calico Guardian will look like within the web-based game:

The Summer is looking good!

The team has been working hard on all of the above, and as some modules took longer than originally anticipated, the end result is that we now have an action-packed start of the summer of 2022!
LFG #StarAtlasSummer!